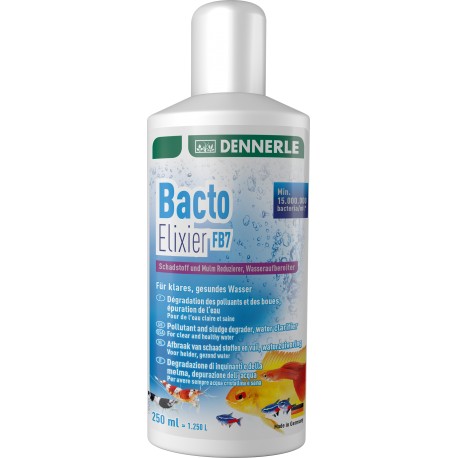 Bacteria play a decisive role in maintaining the biological balance in an aquarium.These invisible helpers continually remove fish excrement, dead plant matter and food residues. Each type of bacteria is specialised in certain substances. This means that only the "right" bacteria guarantee swift and reliable degradation of the waste substances which typically occur in aquaria. A new aquarium or fresh filter material are virtually sterile. Without active assistance, it may take many weeks for a stable bacterial fauna to develop. Substances which are toxic to fish, such as ammonia and nitrate may accumulate and pose a danger to life in the aquarium. Only an extremely minimal level of bacteria is permissible in tap water for human consumption – which is why it is chlorinated by the waterworks. Aquarium fish need water which is "alive", however.

Efficient nitrifying bacteria remove dangerous ammonia and nitrite. Sludge-degrading bacteria reduce the organic sludge on the aquarium bed and in the filter with the aid of hydrolytic enzymes. Other types of bacteria bred specifically for aquaria feed on plant and food residues, fish excrement and organic suspended matter. FB7 BiActive boosts the self-cleaning capacities of all fresh water aquaria on a lasting basis. The optimised water conditions reduce stress. The fishes' well-being is enhanced in a healthy environment. The water remains clearer.