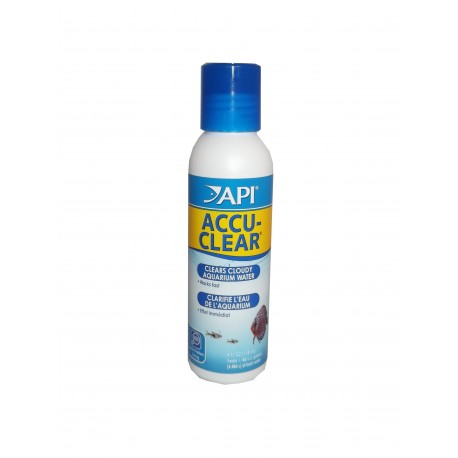 ACCU-CLEAR clarifies hazy aquarium water fast, eliminating clouding brought about by suspended particles.  The fast acting, ACCU-CLEAR clumps tiny floating particles together, forming large particles to be removed by the aquarium filter.   ACCU-CLEAR eliminates the milky haze caused by gravel in new aquariums.  If your water is cloudy, the use of ACCU-CLEAR will help to clear it and clear it fast!

ACCU-CLEAR clears green or cloudy water in freshwater aquariums, by clumping together tiny suspended particles so that they can settle to the bottom or be removed by the filter.

Is ACCU-CLEAR safe with fish and plants?

Yes, ACCU-CLEAR is safe with fish and plants.

Why can't ACCU-CLEAR be used in marine aquariums?

In water with a high mineral content, such as that found in marine aquariums, ACCU-CLEAR will not cause any harm, but it will not clear cloudiness, and may even make it worse.

Can ACCU-CLEAR be used if I have added salt to the water in my freshwater aquarium as part of a supportive treatment for the fish?

Yes. A low level of salt in the water, such as is used in some treatments for freshwater fish, is not a problem with ACCU-CLEAR.

Will ACCU-CLEAR clear the cloudiness caused by bacterial blooms?

ACCU-CLEAR will help to clear the cloudiness caused by bacterial blooms, but because it does not address the underlying cause, this type of cloudiness will come back quickly.

Can I repeat the dose of ACCU-CLEAR if the cloudiness persists?